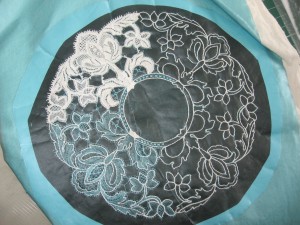 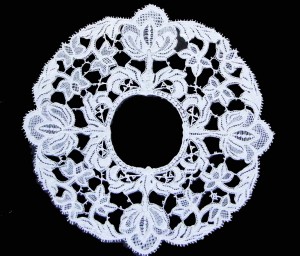 Kenmare Needlepoint Lace made by Sinead Hennessy in 2010 from a design painted by the Poor Clares C.1880

Kenmare Lace is a needlepoint lace and is made with a needle and thread. It is
based on the detached buttonhole stitch. Historically linen thread was used in
the making of Kenmare Lace. Nowadays however, as it is not possible to get
linen thread of sufficient quality, cotton thread is generally used.

The Poor Clares came to Kenmare in 1861.They were requested to come to
Kenmare by the Catholic parish priest of the area, Fr. John O’Sullivan to open a
school. He believed that this was the best way to help the local people recover
from the rigours of the recent famine. The nuns soon realised that the girls had
no way of earning a living once they left the school. They gave them a skill with
which to earn a living. That skill was lace-making.

As the girls became more adept they began to produce lace in saleable
quantities.  Soon tourists began to come to the convent to purchase lace. Later
the work was displayed in the local hotel. Some of the nuns had contacts in
England and elsewhere who helped find outlets for the work. In a short while
many girls began to earn from five to eighteen shillings in a week.

Among the travellers visiting the convent were some well known writers who
were so impressed by the work being done in the convent that they helped
spread the word.

At the Cork exhibition of 1883 some pieces of lace made in Kenmare, among
others, won prizes. Alan Cole who was one of the judges felt that though the
work was excellent, design was poor. As a result of this he gave lectures on
design in many of the convents, which were the centres for lace-making around
the country.

Following this, it was arranged that some of the sisters should study design
under competent masters. An art class was established as a branch of the
school of Art in Cork under James Brennan R.H.A. The Kensington College of
Art allowed the Sisters to have an Examination Centre in their convent so that
without infringing their rule of enclosure they might obtain various Art
Certificates.”

Kenmare became famous not alone for the quality of their fine needlepoint
lace but also for their original designs.

As a result of these classes run by Mr. Brennan two books of lace patterns
consisting of over 100 designs plus some others were produced by the nuns.

They were photocopied some years ago. These photocopies are used at the
Kenmare Lace and Design Centre by today’s lace-makers while the originals are
carefully preserved in the Lace Centre. 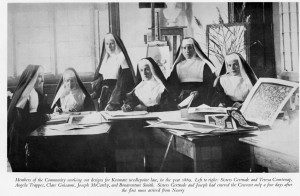 This photograph, from the booklet commemorating the centenary celebrations 1861 to1961, was taken by a Lady Colomb. It is of a group of nuns working on designs. Among them are the sisters Bonaventure Smith, Angela Trappes, Clare Guisanni, Theresa and Gertrude Courtnay and Sr. Joseph McCarthy, daughter of Mr. McCarthy (owner of the Lansdowne Hotel where the lace was displayed).